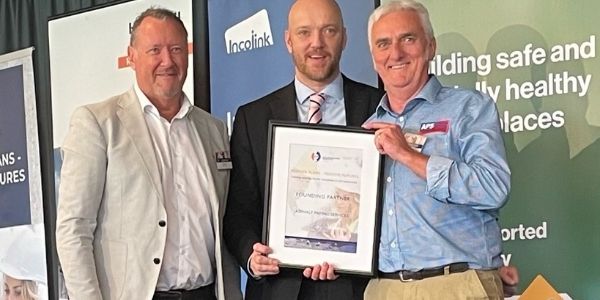 The Civil Construction industry has a prevalence of workers with mental health issues with suicide being 1.7 x higher than for male workers in other industries and three times higher for lower skilled construction workers. The environmental risks being work instability, limited job control and a highly masculine culture.

With a third of all new Workcover claims over the next ten years expected to be mental health related, the Civil Contractors Federation (CCF) recently invited businesses to apply to pilot their Mental Health Positive Plans – Positive Futures project in Geelong.

The Civil Contractors Federation, Victoria, CEO John Kilgour has congratulated APS Managing Director Terence Breen for being one of the first businesses to be accepted as a founding partner. John commended Terence on his leadership and commitment to creating a mentally healthy workplace for the staff at APS, by expressing interest in joining the project.

CCF received a large number of applications, and selected APS to join a group of leaders that have demonstrated a genuine concern and curiosity to actively participate in their project. As a founding partner, APS will support CCF in the development of a suite of tools that will ultimately result in APS being one of the first civil construction businesses in Victoria to develop a mental health action plan. This is a GROW action for APS as an internal project and they will share their learnings with the GROW community.

APS Managing Director, Terence Breen said he is committing to this project in acknowledgement of the number of men who have lost their lives to suicide in Geelong.

‘I recently lost a male friend to suicide and my son’s mates have lost three fathers to suicide, all from the Geelong region. I want to ensure we are doing all we can for our staff and our industry to help prevent suicide and support our workers’ mental health by creating a healthier, positive workplace’.